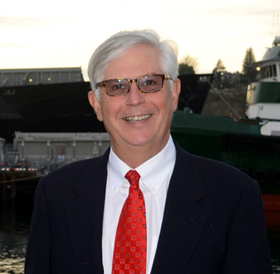 James Jacobsen was a merchant seaman and Alaska fisherman from 1979 to 1984. He has worked as a deckhand and mate in the Gulf of Alaska, Bering Sea, Southeast Alaska and Puget Sound    and is licensed by the U.S. Coast Guard. He is a former member of the Inland-boatmen's Union of the Pacific and the Alaska Fishermen's Union. Jacobsen graduated from the University of Oregon School of Law in 1986, Order of the Coif. He served as law clerk to the Hon. Robert C. Belloni, U.S. District Court Judge, D. Oregon and was an Admiralty Trial Attorney for the U.S. Department of Justice in Washington D.C. He has been in private practice since 1992 representing injured maritime workers. He also represents employees subject to workplace harassment and discrimination. Mr. Jacobsen is licensed to practice in Washington and Alaska.