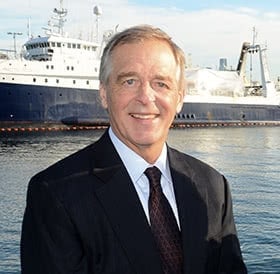 After graduating from law school in 1982, Joe worked as a law clerk for a United States District Judge, William T. Beeks, Seattle. Law clerks are young lawyers who work for a judge doing research, drafting trial memos for the judge, drafting court orders for the judge to edit, and organizing the court’s schedule. When Joe worked for Judge Beeks, the Judge was on “senior” status. As such, he could pick and choose the cases he wanted assigned to his court. Since Judge Beeks practiced admiralty law before his appointment to the bench in 1962, he had an interest in maritime matters. So, the Judge decided that he would hear only maritime cases. In essence, Joe worked for an admiralty court. Joe and the other law clerks learned maritime law from the “inside.” Judge Beeks had a great wealth of admiralty and maritime knowledge that he passed on to Joe and his other clerks. Joe was able to watch trial lawyers in action and learn from some of the best.

After leaving his employment with the Federal Courts, Joe went to work for a 100 year old maritime defense firm, LeGros Buchanan & Paul. That firm represented many of the world’s maritime insurance companies. While at that firm, Joe learned how insurance companies are set up and how they operate. And, quite frankly, he did not like what he saw. Insurance companies are in business, of course, to pay as little as possible to injured people and their families. Instead of doing the “right thing” and paying fair amounts, insurance adjusters and claims managers put money before people. Often, they pursue marginal legal and ethical steps in trying to pressure an injured worker into a settlement. Joe became increasingly uncomfortable in the representation of insurance companies. Joe’s personality and disposition are much more suited to the representation of injured people and their families. So, in 1996, Joe took a leap of faith and started his own firm, Stacey & Jacobsen, PLLC. In doing so, Joe brings his knowledge and insight of how insurance companies operate to assist in the representation of injured workers. That knowledge can provide an edge when dealing with them.

After about a year, Stacey & Jacobsen, PLLC joined forces with other lawyers of similar interests, backgrounds, and practices. Eventually, the firm became Stacey & Jacobsen, PLLC. Since maritime law is basically the same throughout the country, the lawyers have developed a regional and national practice. Joe is licensed to practice in Alaska, Washington and Oregon. However, by using associated lawyers in various sea ports, Joe has handled cases all over the country, including Massachusetts, California, Louisiana, Texas, New York and Florida. The nation wide practice allows Joe and the other lawyers at Stacey & Jacobsen, PLLC to see “fresh” litigation practices and to see how other good lawyers operate in other jurisdictions, all of which brings new ideas and better representation to his clients.

Joe has been married to Elizabeth since 1986. They have four children, three boys (in a row) and finally, a girl. Joe has always been involved in his kids’ education, sports, and other activities. Early on, Joe coached all his kids in Little League baseball, recreational league basketball, and early soccer games. Joe enjoys spending time with his family - from family vacations to family dinners.

Joe and his wife Elizabeth coached their kid’s middle school speech teams. The students would prepare various types of speeches to present in local competitions. Its often been said that the biggest fears in life are dying and public speaking. Learning to get up in front of an audience while young is much easier than when older. One of Joe’s most satisfying achievements is to watch a young student progress from one who struggles to get on his/her feet to speak to have the student get back up and do it again, with just a bit more confidence.

Joe also enjoys coaching the high school mock trial team. High school students enter teams into a competition sponsored by the YMCA and local bar associations. The students play the roles of attorneys and witnesses. They learn the rules of evidence and conduct a full trial. Judges of the competitions are volunteer “real” judges. The winning teams have gone on to national competitions. The experience teaches the students to think on their feet, to be challenged, and to respect the rule of law.

Joe was born and raised on the Maine coast. He still has family there and enjoys visiting New England. He graduated from a small high school in Calais, Maine. Thereafter, he attended the University of Maine in Orono and graduated in 1976. After undergraduate school, Joe decided to get out of the Maine winters for what he thought, at the time, would be “just one winter.” He moved to Florida and was lucky to find a job as a manufacturer’s representative. He traveled all over the southeastern United States. That “one winter away” turned into three years. But, Joe always knew he wanted to be a lawyer. So, he applied to law schools in 1979 and decided to “go west” at the same time. He attended law school at the University of Puget Sound (now Seattle University) graduating in 1982. He has lived in Seattle ever since.

Joe and his law partners feel honored to represent working men and women and their families. Joe comes from “working” family roots. In college, Joe worked in a paper mill during the summers. All too often, Joe sees a client who has a serious injury, one that takes the worker out of the labor market. Injured workers needs good representation so that they can have access to whatever the law allows. Of course, insurance companies stand in the way of those benefits and remedies. Joe feels that a good result is when he can bring a case that provides financial security to the injured client and his family. That goal is what gets him out of bed in the morning.